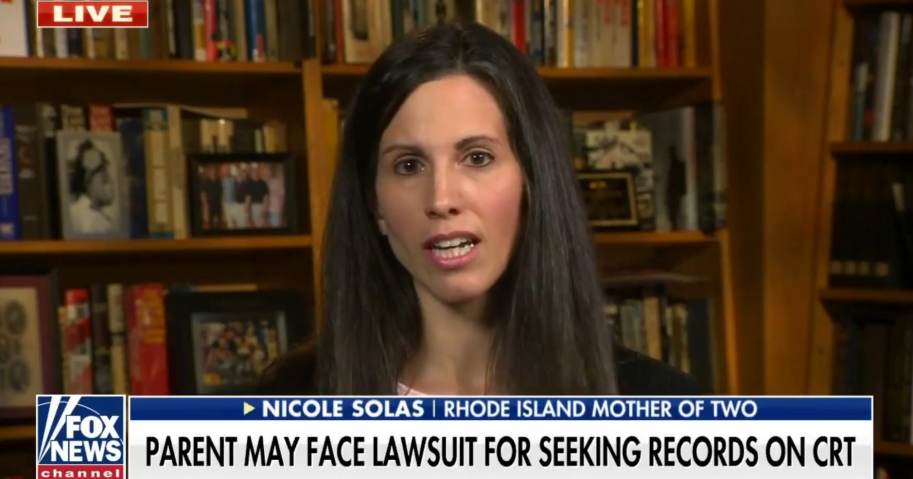 The National Education Association (NEA) filed a lawsuit and a temporary restraining order against a Rhode Island mom for requesting information regarding the CRT propaganda that her child is being taught in school.

Nicole Solas filed an official request with the district for a copy of her daughter’s public school curriculum and other materials under the state’s Access to Public Records Act, but was instead presented with the ridiculous lawsuit.

After she was served papers yesterday, she blasted the National Education Association for hiding the requested information and said that they are “bullying moms” in the process.

Today the teacher union NEA filed ANOTHER lawsuit against me – this time a Temporary Restraining Order and Preliminary Injunction. Will teacher unions bullying moms be an everyday thing now? pic.twitter.com/6WxQ8KTAFD

TRENDING: Mother of Conservative Activist Speaks with The Gateway Pundit After He Dies from COVID Vaccine – He Was Only 27

The union said they filed the court actions because some of the records Solas requested include documents like emails that display “personal information” which would violate their members privacy – something that can EASILY be redacted.

In a statement to Fox news Jennifer Azevedo, the deputy director of the Marxist Union, sounded like they believe their members are above the law and that the lawsuit was filed in hopes the court would determine that their rights to teach your kids whatever they want are more important than transparency.

“We are asking the Court to conduct a balancing test to determine whether our members’ privacy rights outweigh the public interest.”

‘We believe they do, and those records should either not be disclosed or should be redacted accordingly,” Azevedo said.

In other words they are looking to set the precedent that you have no right to educate your own children.

NEARI’s verified complaint, which was filed Monday, states: “Given the circumstances of the requests, it is likely that any teachers who are identifiable and have engaged in discussions about things like critical race theory will then be the subject of teacher harassment by national conservative groups opposed to critical race theory.”

Cornell law professor William Jacobson argued that “his lawsuit makes little sense on its face. The unions purport to be protecting their members non-public documents and  information, but the public records law only applies to “public records” as defined under the statute.”

The filing from Monday, however, seeks for the court to examine certain categories of documents which are “potentially public records” under the Access to Public Records Act.

It adds that if records aren’t determined to constitute a “clearly unwarranted invasion of privacy,” they should be disclosed with redactions of personally identifiable information or “information which may lead to the identity of such teachers.”

The “National conservative groups” are to blame for the unions lack of transparency – yeah, give me a break.

Parents have every right, especially if their child is enrolled in a public school and as a taxpaying citizens, to review and have access to what is being taught to their kids.

Why are these radicals fighting so hard to keep parents in the dark?

One thing is for sure, they wouldn’t file a restraining order against a concerned mother if they had nothing to hide.